Want to experience the fall season with true Seattle coffee?

The kind of coffee that gave Seattle the reputation for being a coffee town? 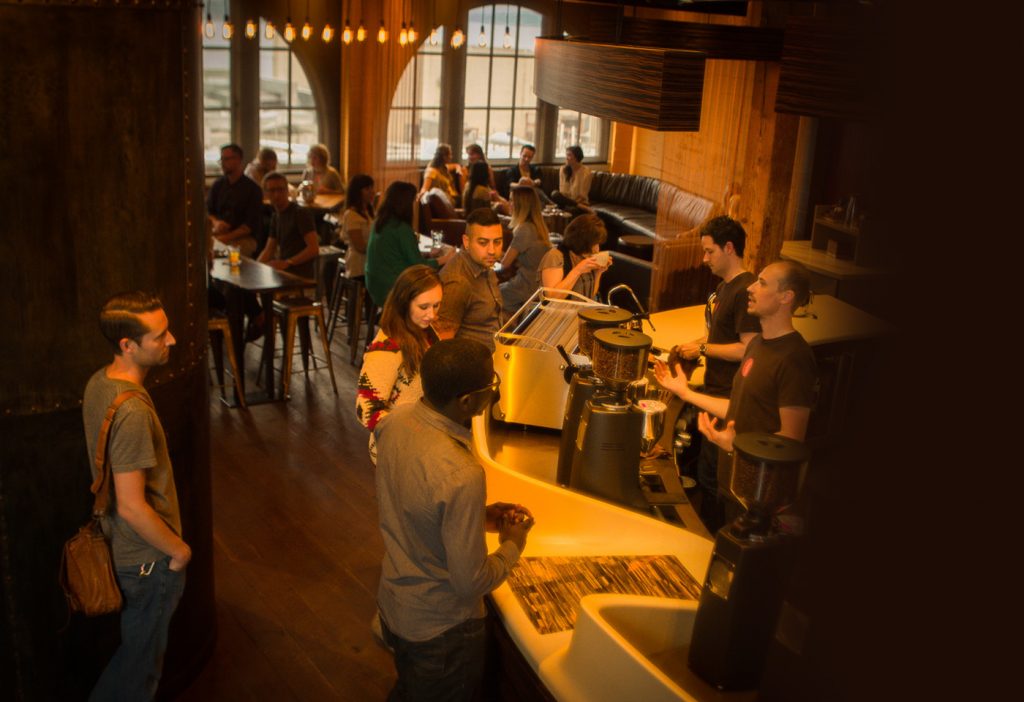 Storyville is on the top floor of the Corner Market building at First & Pike in Pike Place Market.

Besides incredible coffee, Storyville has two things going for it:

Absolute prime location (you can see the Public Market Center sign from the windows), and rich, dark décor that’s eminently conducive to that cozy fall feeling.

The Danish have a word for it: hygge (HYU-guh). It’s the “mood of coziness and comfortable conviviality with feelings of wellness and contentment.”

Essentially, it’s the good feeling you get from being cozy. 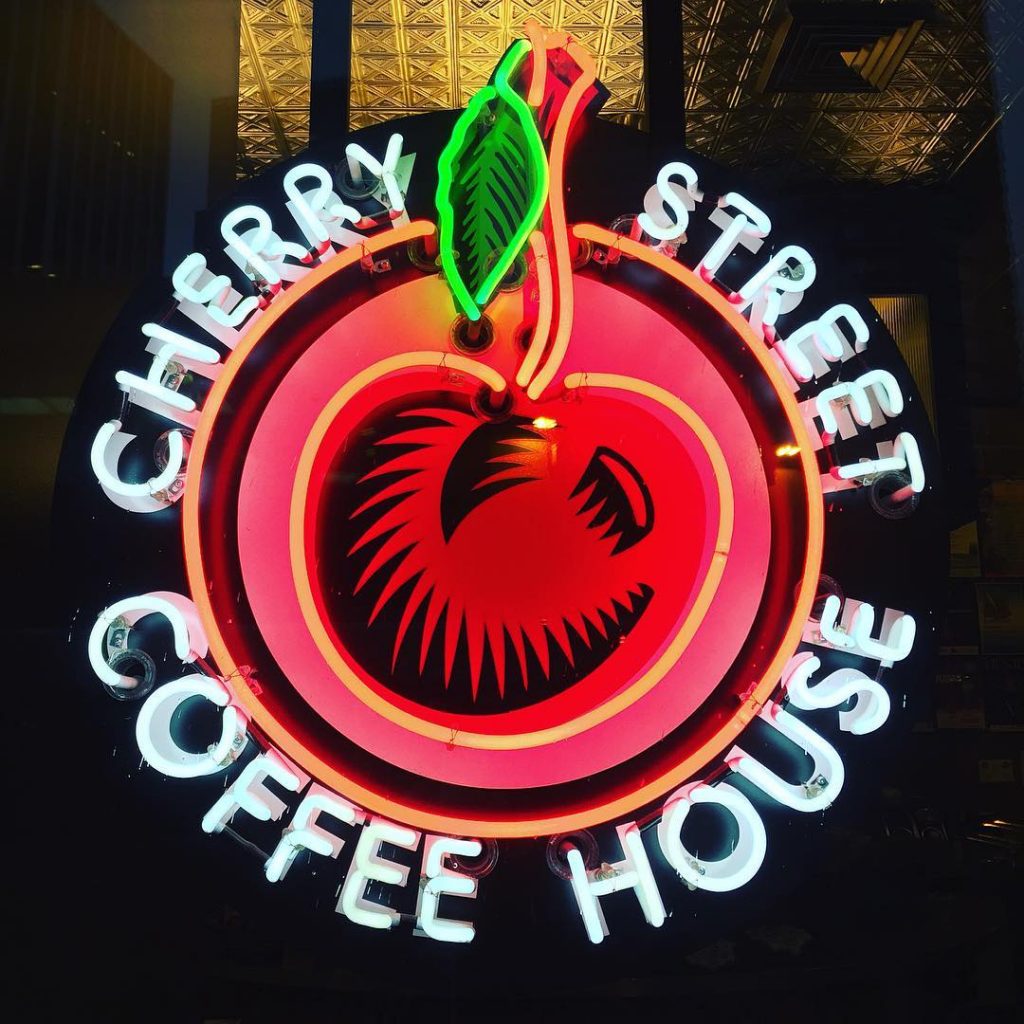 Three guesses what street it’s on…

There’s just enough neon and retro cursive to make it feel like the neat little melding of a coffee shop and a ’50s diner.

It’s an apt vibe: Cherry Street is big on the comforts of home, from the décor to the menu, with plenty of rainy day favorites like soups and breakfast sandwiches.

We’ll resist making any jokes about their prices being a steal (ladro means “thief” in Italian).

In fact, it’s best to throw all jokes aside, because these guys and gals are dead serious about crafting the perfect cup of coffee.

Over the past two decades, “locally sourced” and “environmentally sustainable” have gone from admirable yet unfamiliar concept, to must-have byline in a restaurant’s website description.

But despite becoming a cornerstone of the usual culinary yadda yadda, “locally sourced” and “environmentally sustainable” still hold deep meaning to many roasters.

Caffe Ladro is one of them, and it shows. 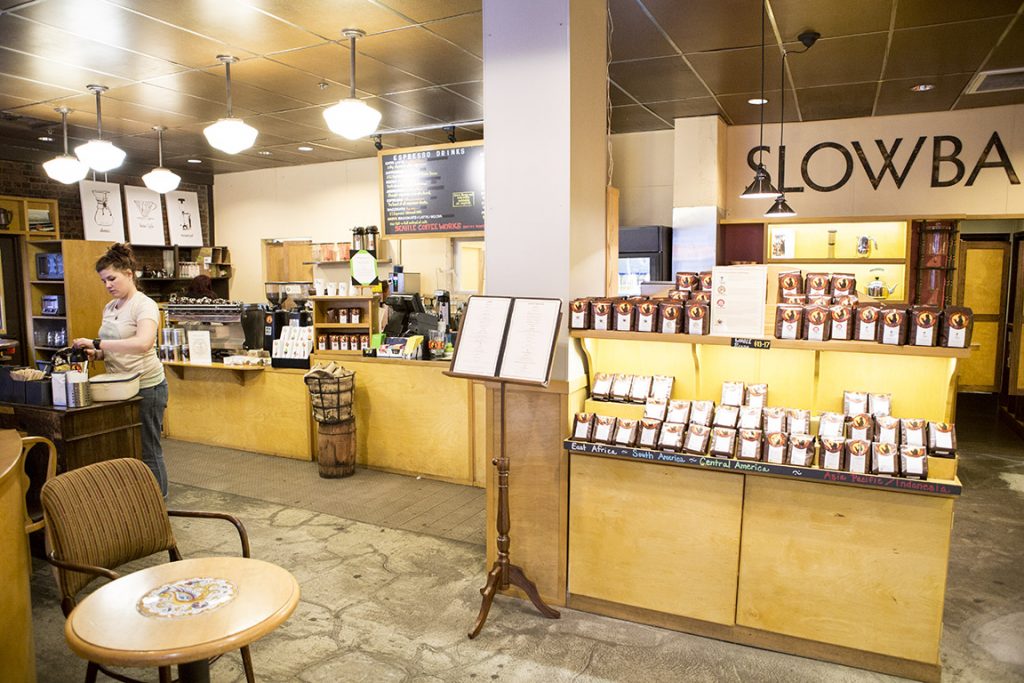 If you’re looking for Instagram-worthy latte with a leaf or a heart in the foam, this is your spot.

Look for the large brown silhouette of a man sipping a cup of the good stuff above Pike Street.

He’ll lead you to all manner of delicious beans from all over the world, from Kiriga in Kenya to Huehuetenango in Guatemala.

If anyone can let us know how to say “cheers” in Swahili, that’d be great, thanks. 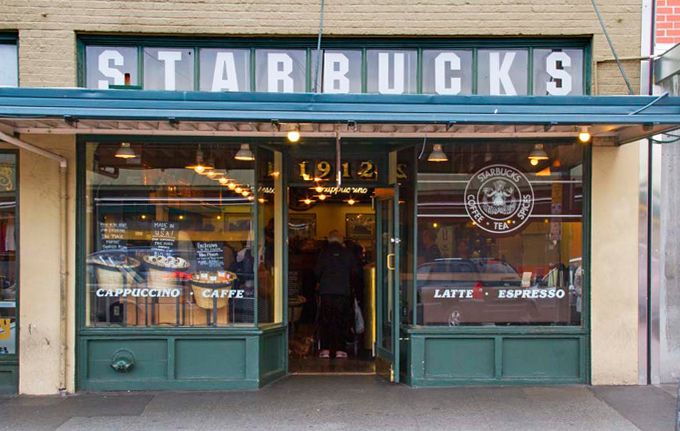 As you might have known already, the Starbucks Siren’s original pad is right here in Pike Place Market.

Dating all the way back to 1971, the Pike Place Starbucks store has kept its original logo and livery.

It’s a quaint, intimate store that tells the story of what is now the world’s most recognizable coffee brand.

They’ve even kept all the original touches: they’ve kept the old brass labels on their bins, the bar is raised so it’s easier for you to see your barista making your drink, and yes, the baristas still toss cups to each other.

Oh, and don’t mind the big pig statue, that’s just Pork ‘n’ Beans, who was created locally for the 2001 Pigs on Parade competition that raised money for the Pike Place Market Foundation.

Remember how we said Cherry Street Coffee House had a bit of an Americana vibe?

Well Ancient Grounds doesn’t just have the vibe of an art museum.

It practically is one.

The entire space is decked out with all manner of crafts, curiosities, statues, sculptures, relics, and more.

Oh, and the coffee’s pretty damn good too.

So if you want to sip your macchiato while gawking in amazement at a cornucopia of tribal treasures, this is the place.

It isn’t necessarily a “fall” atmosphere, per se, but Ancient Grounds is just too unique, too fascinating, and too quintessentially Seattle to leave off the list. 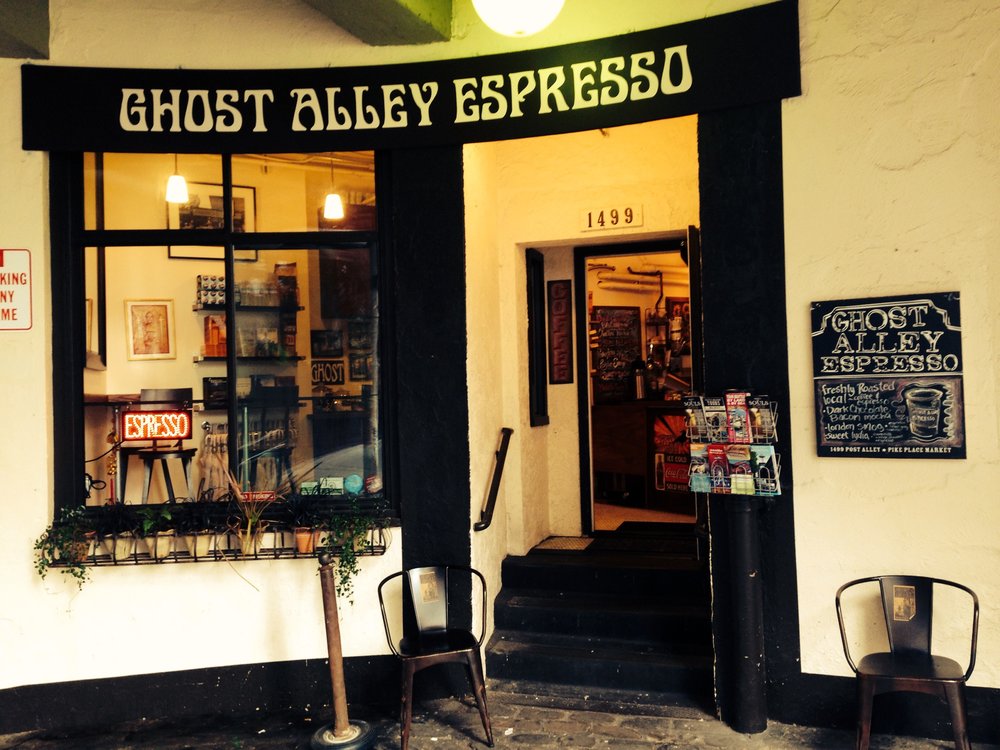 Here’s a place near and dear to our hearts.

Mainly because of their incredible coffee, but also because we share a common detail:

We’re both old spaces remade and reborn into something awesome.

It was abandoned for several years until Mercedes Carrabba, the pioneer behind Market Ghost Tours, decided to revitalize it into a brand new coffee “haunt.”

Now, a little piece of disused Seattle real estate is thriving once again, and is responsible for bringing joy to countless travelers.

Host Your Holiday Event at The State Hotel

Need a Brewery Fix? Here Are 5 of Seattle’s Best